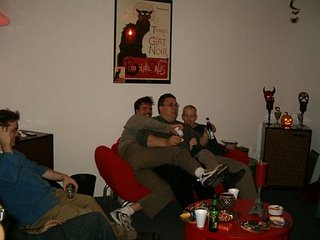 This Picture from Friday Night Needs a caption. Best caption wins a drink of some sort! Oh and Ghillian I still owe you a beer from the last Caption Contest.

Enjoy!
Posted by DCepticon at 7:45 AM

Aware of his severe allergies to feline fur and demon inspired masks: Tim and Michael John attempt to get to Scott before they do. (MJ discovers Scott's shoulder is quite tasty).

Artistic Director Randy Baker looks on as Tim Getman, Scott McCormick and Michael John Casey perform for him a snippet from their new homo-erotic melodrama "Love and a Red Couch".

no wonder that black cat looks so irritated.

In the spirit of Halloween, Rorschach artistic director Randy Baker conjures up his greatest invention yet – the three-headed Actorstein. This particular Actorstein (which shouldn’t have a name ending in Stein at all) serves as a force to reckon with by combining the talents of all three of its heads: it is impossibly tall, it spews out comedic bits at the speed of light, and it has a voice that resonates with such deep vibrations that it could collapse entire small cities. Needless to say, Actorstein has quite a way with the ladies.

Randy smiles when he thinks of the havoc he will now be capable of creating.